WE BUY, SELL AND TRADE HOME ARCADE PARTS AND UPGRADES!

We make custom 3D printed accessories for all Home Arcade platforms! If we dont have it, we can get it or make it! We buy and sell all day, everyday! 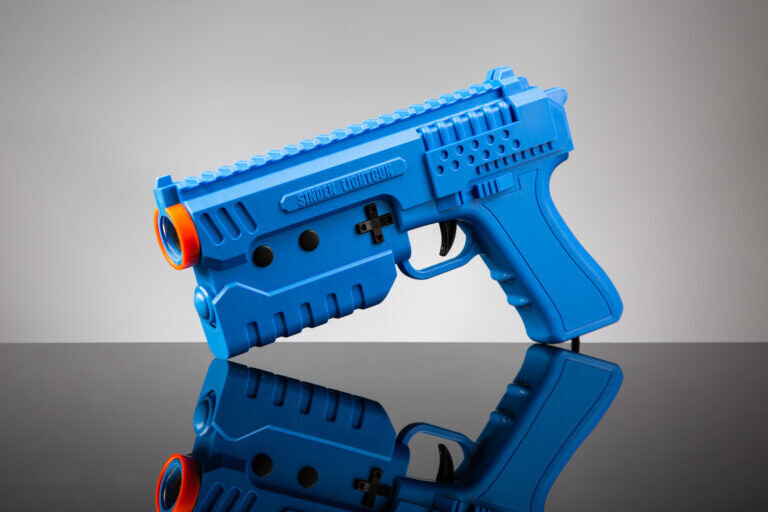 Sinden Light Gun - The Only Plug-N-Play Lightgun For LCDs!

WE HAVE SOLD OUT ON OUR FIRST SHIPMENT... MORE ARE ON THE WAY!!!! Thanks for your patience!

The Sinden Lightgun® is the world’s first true LCD compatible Lightgun, providing all the functionality and game experience of the original CRT Lightguns without requiring additional hardware such as infra-red sensor bars.

The Sinden Lightgun is always accurate even if you change position or angle which means you can ditch the crosshairs! It interacts directly with the television and doesn't require additional hardware around the television or any calibration (some setup and calibration can be required depending on the platform.)

The Sinden Lightgun has a high quality custom injection moulded ABS shell and a custom production PCB. It features a high speed 60fps camera, a CPU, USB interface, a trigger, 4 assignable side action buttons, pump action reload, a 4 way D-Pad and offscreen reload. So far it has driver software for Windows and Linux (including Raspberry Pi), it is mapped to behave like a physical mouse for easy software compatibility. Providing the software is compatible (such as Mame) you can use 2 Sinden Lightguns at the same time. There is an optional recoil upgrade which adds a large solenoid, capacitor and complex innovative solenoid circuit to give that arcade recoil effect without needing any additional power supply.

Available now for the first time from a USA distributor! Order today for FAST and FLAT RATE shipping within lower 48 USA states! (Additional fee will be added for international shipments or to Hawaii/Alaska.)

The Sinden Lightgun® communicates by controlling your mouse cursor which ensures compatibility with nearly all Windows and Linux applications that can use a mouse including (but not limited to):

This means it’s possible to play all your favourite Lightgun games such as:

And many many more.

The Sinden Lightgun® calculates where you are pointing on the screen over 50 times a second and provides a complete end to end calculation in less than 20ms. As it remains completely accurate no matter how long you play or if you move positions you can turn off your crosshairs and enjoy a completely authentic Lightgun experience.

How does it work?

The Sinden Lightgun® software adds a thin border around your television display. The hardware is an optical based system which uses this border to visually calculate the aiming position.

The Sinden Lightgun® can also calculate the angle you are pointing at the television and also your relative distance which hopefully in the future can open up new gaming concepts and interactions.

Save this product for later
Display prices in: USD

Just wanted to thank you for the Sheldon Shelf and other products. The Sheldon Shelf has made my lightgun games so much more enjoyable. I have already recommended it to several others.Thanks again for the great support and products. You rock!

Got the shim kit and followed the online instructions. Very detailed and very good. I was able to install the shim kit on the trackball and it turned out perfect. Trackball Even feels better when playing Golden Tee. Good stuff!!!

I was a bit intimidated when I started the install on the shims, but it was incredibly easy and they brought my broken trackball back to life. Highly recommended! Thank you.

As amazing as the iircade is..... having an 8 way is a must for arcade machines... however some games just play better the way they were ment to be played.... and Uplay has it right!!! The iiRestrictor is a must for your 4 way games.... I can tell you first hand... I’ve raged and lost my mind playing the awesome games of Congo Bongo and Burger Time... but with this device I’ve been able to land high scores and keep my sanity at the same time. High Quality material, great feel... fits in place with no modification necessary!!! Keep your warranty valid with this game changer.

YOUR #1 SOURCE FOR ARCADE1UP, ATGAMES, iiRCADE, TOYSHOCK AND ALL OTHER HOME ARCADE CABINET OEM AND UPGRADE COMPONENTS.

Uplay Arcade strives to provide our customers the best service possible while giving you the best prices available! With the cheapest shipping possible, tested and pro-rated priced products, and our 100% guarantee, Uplay Arcade will ensure your Arcade1UP and AtGames OEM products and upgrades will keep you and your family playing! Contact us at our email below to submit products to sell or trade to us! We will get back with you soon!

*Arcade1UP™, AtGames™ and iiRcade™ have not endorsed these products, or have any affiliation whatsoever with www.uplayarcade.com. As is the case with any unauthorized modification, installing items internally will void your manufacturers warranty and any risk in doing so will be solely yours!